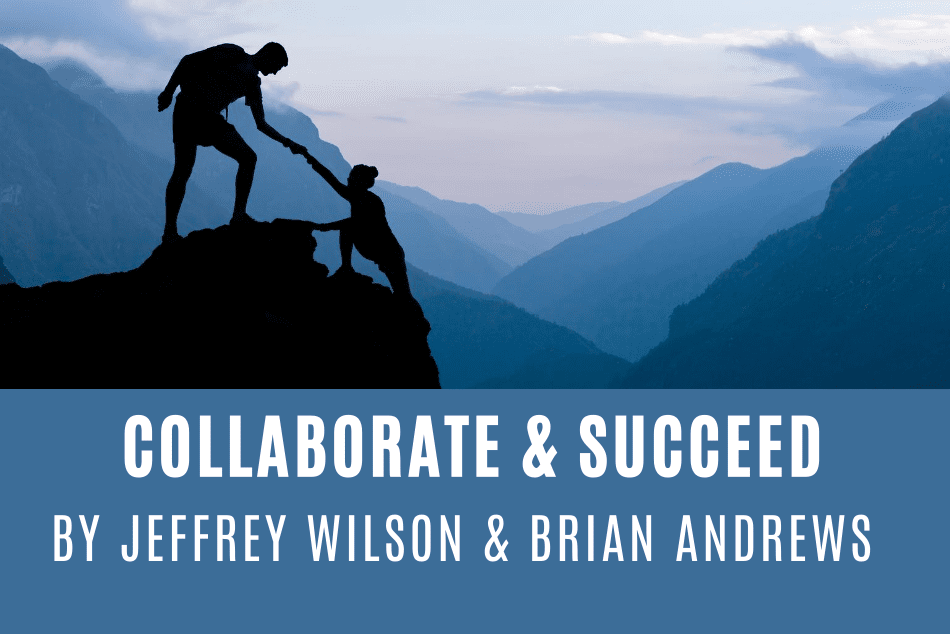 BRIAN: “You wanna collaborate on this piece for Career Authors? The topic is collaboration.”

JEFF: “Sure, dude. Divide and conquer. You wanna take half the questions and I’ll take the other half?”

Welcome to a typical day in the life of Andrews & Wilson, the Navy veteran coauthor team behind the TIER ONE military thriller series. After publishing several books independently as solo authors, we officially started coauthoring in 2015. Our first hit novel, TIER ONE was released 1 September 20016. In the four years since we’ve collaborated on twelve novels—eight of which are published and four others presently in various stages of production. Since we started collaborating, our productivity and sales have skyrocketed compared to what we were accomplishing as solo authors. In this blog post, we thought it would be fun to interview each other and cover the most common questions we get asked during interviews and on conference panels.

JEFF: “Lots of people ask us about our process. Do you wanna walk folks through our method for co-authoring?”

BRIAN: “Absolutely. First and foremost, all Andrews & Wilson novels follow the Three-Act Structure. After brainstorming, we generator a rough outline for the first Act and assign chapter writing responsibilities between the two of us. For example, Jeff might take chapters 1,3,7,8,10 in Act I, and Brian would take 2,4,5,6,9. In general, we write the chapters sequentially and simultaneously, swapping our completed chapters back and forth between us as we go so the other guy can see what is unfolding in the scenes he’s not responsible for. After Act I is written, we repeat the process for Act II, and then again for Act III.

We decided we had to put our egos in the drawer and focus on the quality and saleability of the end product, instead of trying to outdo each other’s prose.

JEFF: “That’s right. And all Andrews & Wilson novels are written in the third person with multiple POVs. We are very disciplined on this point to have only one POV per chapter—no swimming around in multiple character’s heads at a time. The other important thing to clarify is that we both take turns writing all the different characters. Lots of people mistakenly assume that we divide up the characters and stick to writing the same one for the entirety of the novel. What fun would that be? For us, it’s important that we each spend time in every POV character’s head in every novel. That way, every character’s persona has a little bit of Andrews and a little bit of Wilson in his or her psyche.

BRIAN: Agreed. It’s one of the ways we maintain a consistent voice in our books, instead of the novel coming across like it was written by two different authors. Do you wanna share our other secret?

JEFF: Two words—DEVELOPMENTAL EDITING. By the time an A&W book goes to press, every sentence has had a minimum of five passes per author. This is hugely important to our process. In our partnership, every word is fair game for deletion or revision. Every idea is open for debate and discussion. We agreed in the very beginning of this gig, that we would take our egos out of the equation. It’s not about being able to say “I wrote this sentence” and “Brian wrote that sentence,” or “this idea was my idea” and “that idea was his.” Coauthoring is not a joint custody agreement. The sum is greater than the parts and trying to go back and parcel out who contributed what is a pointless activity. At the end of the day, when we finish a book, we look at it as “our” book. That’s what we’re proud of.

In our partnership, every word is fair game for deletion or revision.

BRIAN: I totally agree. Which is pretty much the point of collaboration in the first place. Imagine putting together a 1000 piece jigsaw puzzle and a week later trying to remember who placed which piece. Who does that! In our case, we brainstorm the plot together, the characters arcs, the action sequences, the climax, and the resolution. And when that’s done we collaborate some more.

JEFF: Yeah (laughing)…there’s marketing and promotion, social media, copy editing, graphics and artwork, proposals, contracts and legal, strategy, interviews…we share the load on literally everything. And honestly, that’s the best part of the whole deal. The load is heavy—too damn heavy to have to carry alone. That’s where our military ethos kicks in. In the Navy SEAL training program, BUD/S, the candidates have to carry RIBs (rigid inflatable boats) over their heads up and down the beach. No one man can carry that boat alone. It takes collaboration and cooperation. The same is true for us. Only as a team, have we been able to overcome the most difficult obstacles in this business and find success.

If knocked down, I will get back up, every time. I will draw on every remaining ounce of strength to protect my teammates and to accomplish our mission. I am never out of the fight. —Excerpt from the Navy SEAL Creed

BRIAN: I hear you, brother. I wouldn’t want to do this gig without you. As co-authors, we get to leverage our individual strengths and augment each other’s weaknesses. There are simply some things that you do better than me. Thankfully, I figured that out early in the partnership. Ha!

JEFF: Well, you are a submariner…

BRIAN: Thanks for that.

BRIAN: Last question before people get sick of us. What collaboration advice would you give to aspiring writers who might be considering co-authoring?

BRIAN: That’s right. And we decided we had to put our egos in the drawer and focus on the quality and saleability of the end product, instead of trying to outdo each other’s prose. I distinctly remember you saying, “If you think it will sell one more book or get us one more satisfied reader, I’m willing to change any sentence in the book without complaint or debate.”

JEFF: It’s all about trust, compromise, and constant communication. That’s the key to finding success in co-authoring.

BRIAN: And the key to finding success through collaboration. Thanks for helping me with this post.

If you enjoyed this post or have questions or comments on co-authoring and collaboration, join the discussion on the Career Author’s Facebook Page.

Andrews & Wilson is bestselling co-author team of multiple covert ops and action-adventure thriller series: TIER ONE, SONS of VALOR, and THE SHEPHERDS. Starting in 2021, they will be writing W.E.B. Griffin’s Presidential Agent series for Putnam. Their newest release, COLLATERAL is available now on Amazon and Audible.

Jeffrey Wilson has worked as an actor, firefighter,
paramedic, jet pilot, and diving instructor, as well as a vascular and trauma surgeon. He served in the US Navy

for fourteen years and made multiple deployments as a combat surgeon with an East Coast–based SEAL Team. The author of three award-winning supernatural thrillers, The Traiteur’s Ring, The Donors, and Fade to Black, and the acclaimed faith-based thriller War Torn. He and his wife, Wendy, live in Southwest Florida with their four children.

Brian Andrews is a US Navy veteran, Park Leadership Fellow, and former submarine officer with a psychology degree from Vanderbilt and a masters in business from Cornell University. He is the author of three critically acclaimed high-tech thrillers: Reset, The Infiltration Game, and The Calypso Directive.