What Readers Want…and What They Don’t 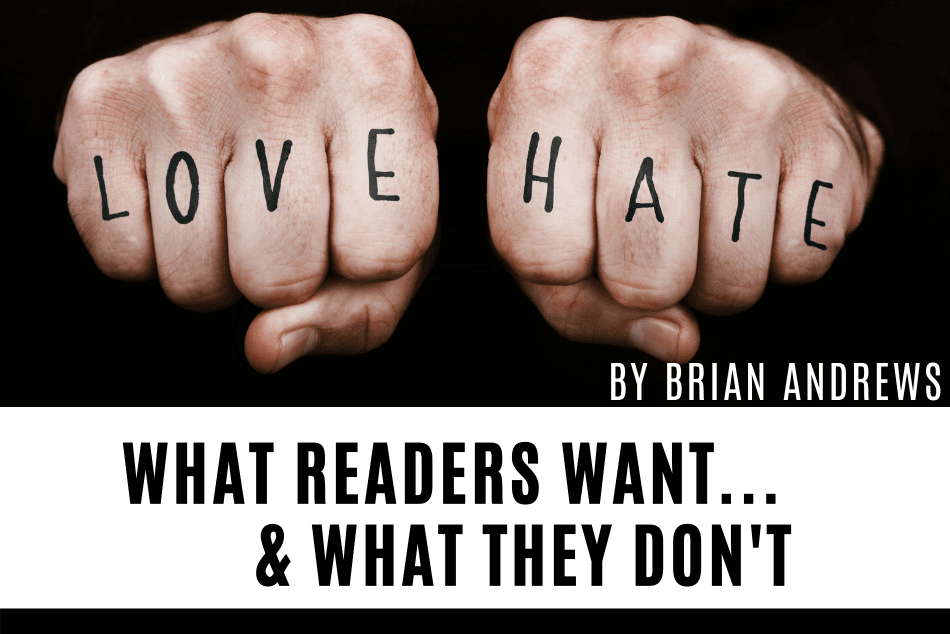 Whether you’re a published author or an aspiring one, there’s only one question that should be keeping you up at night and it’s the title of this blog post. Instead of postulating aimlessly, I decided to cut out the middle man and go straight to the source. I reached out to some of the industry’s most devoted and thoughtful “super” fans for answers.

The individuals quoted in this article are not professional critics, paid influencers, or folks with an agenda to promote. Rather, they are die-hard genre fans who read dozens of books a year, regularly post reviews, and want nothing more than to be thrilled by every page. I asked them two simple questions:

I think their answers will both inform and surprise you…

What keeps you turning the pages?

“If I am invested in the characters I will flip page after page to find out how it ends.”  —Todd

“The #1 reason is when I can feel the book on an emotional level because I have a strong connection with the characters. I love watching them overcome adversity or tragedy. It can be personal or professional, but if they grind through painful, dangerous or dirty situations and come out victorious/clean/redeemed on the other side then I’m hooked.”—Steve

“Having a connection with the main character, who is likable but not overly likable, and they have some mystique or intrigue about them.” —Chris

“If a story has me invested, either through great characters, or a killer plot, I won’t put that book down until I’m done.” —Derek

A common pattern emerged as I read through the responses—readers keep turning pages when they are invested in the characters. With such a strong, consistent theme, I had to dig deeper. I followed up, and asked:

What about a book makes you invest in their characters?

“Raw emotion is what drives me to read a book. If I’m downright devastated for a character, then the book has me hook line and sinker.” —Sarah

“I like men who are bada$$ and have their center on a true North, but can also exhibit genuine emotion…I like characters who I would like to know as a person.” —Vikki

“It is the ‘normal’ fears, personality defects, and desires in characters that allow me to see something of myself in them… THEN… to watch them overcome physical, psychological, and emotional challenges is that much more impressive and meaningful.“—Todd

“Sometimes I’ve had a similar personal experience that connects us and makes me root harder for them. Might not be a big thing, but any small detail that I can relate to. Another big reason is watching them overcome adversity or tragedy. I also like intelligence. There’s too much stupidity in the world that I like reading about characters who think critically and outwit others…as long as it’s done with integrity and purpose.” —Steve

Unlike the answers to the first question, the responses to the second question took a different path, surprising me yet again. As it turns out, the reason people stop reading a book is not simply the opposite of why they turn the pages.

What makes you stop reading before the end?

“A few months ago I read a bestselling book from a known author and I could not continue it from the 50% mark. His hero was a crybaby who sulked and the story did not move from where it had started in the beginning. The trick is to make the protagonist humane but still be above us.” —Deep

“What makes me give up on a book— belaboring a point, too much crying for every hard event happening in the story…it makes me think, “Oh come on now, move on.” Perhaps another big thing for me is too little detail because I then think that the person hasn’t researched the subject enough.” —Jenny

“I walk away when a book deals with something that is in my face everyday. I don’t want to read about Covid-19 while I’m dealing with a Covid-19 pandemic in real life. I also can’t stand writers who put a ridiculous amount of time writing about something that has no bearing on the story.” —Chris

“I’m out if a book opens with: a weather report, characters waking up, characters describing themselves while looking in the mirror, and/or the alcoholic detective battling his addiction.” —Janey

“I stop a book early and don’t finish it when it’s too technical, or I get lost.” —Sarah

“Poor writing, aimless plot that jumps around too much, or it takes so long to get going that I get bored.” —Steve

What I found intriguing about the responses to the second question was the variety. Readers could have easily just said the inverse of how they answered the first question—something to the effect of “I stop reading when I’m not invested in the main character,” but that was not the case. The reality is more nuanced than that.

Readers want to become invested in characters, and they only tend to abandon a book when the story-telling mechanics or character development is so poor that it undermines the experience.

One of the most revealing responses, and one that I encourage all authors to remember and keep close to your writer’s heart, came from Vikki:

Readers want to meet characters who are so authentic, interesting, and inspiring that they would like to know them in real life. In a nutshell, that’s what it means to become invested in a character.

I really enjoyed preparing and writing this post. Thank you Todd, Chris, Derek, Vikki, Jenny, Kashif, Steve, Janey, Deep, and Sarah for taking the time to share your thoughts and wisdom with Career Authors and all the writers out there trying to write characters and stories worthy of your time and emotional investment!

How would you answer the questions? Chime in on Facebook!