The Art of the Twist – How to Shock, Surprise & Satisfy Your Readers 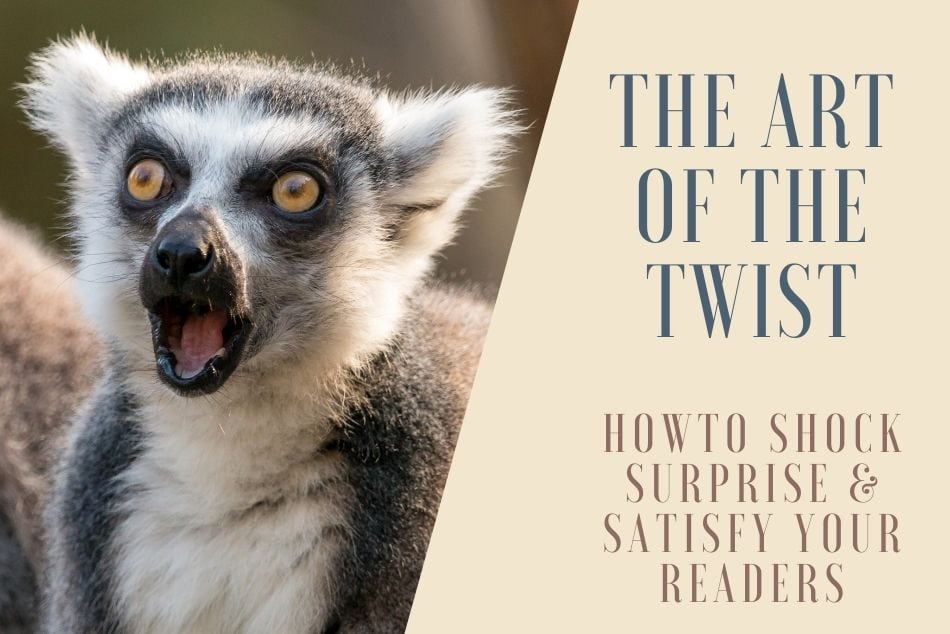 The Art of the Twist – How to Shock, Surprise, & Satisfy Your Readers

If that’s that title of your novel’s top Amazon review then you know you did your job. But pulling off an effective twist in a mystery or thriller novel is no easy task. Today’s readers are saavy, well-read, and not easily hood-winked. If you think you’re going to blind-side your reader and rock their world without understanding the craft and pitfalls of writing a twist then you are sorely mistaken my friend. Thankfully, Career Authors is here to help…

The key to pulling off an epic twist is three-fold: (1) understanding exactly what kind of twist you’re trying to pull off, (2) properly controlling the flow of critical information to the reader, (3) not disappointing the reader by failing to deliver the goods.

To get started, let’s review the different kinds of twists:

I like to think of this as the “Sherlock Holmes” twist, and it is one of the most common plot devices used in print and film. But this variety of twist doesn’t only apply to detective stories. Any novel of suspense or thriller can utilize this plot device and the magnitude of the twist can vary from unexpected to mind-blowing depending on the stakes and scope of misdirection.

The basic premise here is to provide the reader with clues, information, and opinion that comfortably leads him down one path and allows him to make logical deductions about what is happening. But during the journey, disparate, confusing, and often seemingly irrelevant information is interspersed with the more obvious and tenable clues. At some point, the deductions the reader had previously made are upended when new and critical information is revealed and that’s when the moment of epiphany occurs.

Just like a page from a child’s “connect the dots” coloring book, only when all the data points are connected can the true picture be recognized.

Everything Is Not What It Seems

Think of this variety of twist as a paradigm shift. The reader is led to believe the cast of characters are functioning in one universe and operating according to one set of facts only to find out that up is down and black is white. Once this type of twist is executed, it’s impossible to go back and look at things the way they were before.

An epic example of this is executed flawlessly in the movie THE MATRIX. Thomas A. Anderson thinks he lives and works as a computer programmer in 1999, only to discover what he thought was the real world is actually a computer simulation.

A Character Is Not Who She (He) Seems To Be

This is the character version of the paradigm shift. The reader is led to believe a an important character is one type of person, only to later discover she is not the person we thought.

This is the most common type of twist and is used by authors in all genres of fiction. Some authors execute this twist effectively, other’s not so much, but it is worth mentioning that readers are now conditioned to expect it.

A recent example of this shows up in the HBO miniseries THE UNDOING based on the novel YOU SHOULD HAVE KNOWN. To avoid spoiling the twist for those who haven’t seen it, I won’t reveal any details other than to say that one of the characters is not who they appear to be.

A great example of this appears in the Hunger Games series when Katniss Everdeen wins the Hunger Games and earns Victor status. But after her victory is recognized and certified, President Snow changes the rules, forcing her to go back to the games the next year. This twist is something Katniss never imagined could happen, and so we as readers don’t see it coming either.

By default, readers trust POV characters…but what happens if a critical POV character is unreliable? Unlike the other varieties, this type of twist is more deceptive and risky. In my opinion, the unreliable POV character by default must either (1) suffer from a perception-altering condition (be it mental illness, confusion, or substance abuse) or (2) the author has chosen to break the fourth wall (i.e., the character is aware of the reader and intentionally misleading him or her). Tread carefully in either case.

Gillian Flynn’s GONE GIRL is arguably the most famous example of this type of twist. As a reader, we were taken down one path by Flynn, trusting the POV character’s perceptions and narration of information, only later to have the proverbial rug pulled out from underneath our feet, when Amy turns out to be a liar, manipulating us as the reader like she does the other characters in the story. Flynn executes this plot twist brilliantly, but attempting something similar is no small undertaking. This is masterclass territory, folks…consider yourself warned.

Regardless of what type of twist you’re trying to pull off, the key to success is controlling how and when critical plot information is communicated to the reader. No one can tell you how to do this as it is 100% story specific, but I can tell you that you must be very intentional and organized about how and when clues, new information, and contradictory evidence is revealed.

For me, a great metaphor for writing a twist is to view your POV characters as competent and charismatic tour guides, taking your readers on a tour through a magnificent and sprawling castle. It is through their observations, opinions, and commentary that the reader is led on a comfortable journey—one that is so interesting and fun that they have no reason to doubt the veracity of the tour or worry about where the tour guide is taking them. But all the while, you the author know that these tour guides were never given a full tour of the castle themselves. So when they make an unexpected wrong turn and the tour group finds itself trapped in the dungeon or wandering through secret passages, your POV characters are experiencing the twist in real-time and must make sense of the discovery and/or epiphany hand-in-hand with the reader.

Just because you managed to pull off a twist, doesn’t mean the readers will embrace it or even like it. In fact, I would argue writing a twist is risky business, and that the odds you’ll disappoint rather than thrill the reader are better than 50/50. The reason for this is probably because people (in general) take comfort in predictability. Most of us don’t like being surprised. And we really don’t like being tricked, deceived, or made to feel stupid. So if your twist, makes your reader feel any of these things you’re going to hear about it in your reviews!

Here are some of the most common pitfalls and rookie mistakes to avoid:

Out of Left Field

What I mean by this is that a good twist can hit the reader like a blindside tackle, but only if they’ve been informed in advance they’re playing football. In other words, the twist has to make sense given the world-building the author has done and the information provided.

For example, let’s say your novel starts off as a story about a gritty, private investigator who solves cases by tenaciously collecting evidence. But when evidence fails to reveal the true killer, the PI solves the case because he’s clairvoyant. This ending would qualify as an “out of left field” twist. By incorporating a supernatural element without precedent or foreshadowing, the twist is non-sensical and will surely disappoint rather than thrill readers.

Any twist that comes off as random, highly improbable, or requires the reader to suspend her disbelief at the end of the novel will fail.

A twist can fail because it was too easy to predict. When this happens, the reader’s reaction is likely to be “meh.” The common culprit for this situation is not effectively managing the flow of information. Or, the twist may have been telegraphed or foreshadowed too often in the narrative so that when it is finally revealed the reader feels no sense of surprise or pleasure in being proven right.

This rule is simple and all too frequently violated. Authors must never betray their characters. Instead of trying to define it, let me give you some examples.

Imagine if, in the Lord of the Rings, Tolkien had thrown us a curve-ball by having Sam steal the ring from Frodo and give it to Sauron. Or, what if in Star Wars, Yoda was revealed to have been collaborating with Darth Vadar from the beginning to deliver Luke to Palpatine. Yes, these would be epic events that nobody would have seen coming, but they also would have been terribly unsatisfying twists because these acts betray the ethos of these characters to the core.

We’ve all read books and seen movies where the trusted friend, partner, or lover turns out to be a villain. It works brilliantly when seeds of doubt about this character’s true nature have been carefully sewed. It fails miserably when prior to the betrayal the character has been portrayed as nothing by loyal and stalwart.

What if at the end of the Lord of the Rings, it was discovered that Aragorn—as the heir of Isildur—could wear the Ring of Power and not be corrupted by its influence. Why or how the Ring doesn’t affect him when it affects all other men is never explained, but it’s known by Frodo. So instead of taking the Ring to be destroyed inside Mount Doom, Frodo decides to give it to Aragorn who puts it on and defeats Sauron in battle.

Yes, this would be an epit twist and undoubtedly thrilling to see Aragorn fight Sauron in mortal combat and win, but it would trash the entire canon Tolkien had built, infurating millions and millions of readers. Can you imagine?

Every novel is a journey that the reader goes on with your characters. A good detective novel makes the reader embrace her inner sleuth. A good action novel makes the reader feel like he’s fighting sword and shield alongside the hero. If your twist ruins the reader’s sense of pride, accomplishment, or connection to the characters or dishonors the journey, then your twist—regardless of how clever, shocking, or original it might be—is bound to fail.

Twists that come off as random, too improbable, or require the reader to suspend their disbelief at the end of the novel may upset, disappoint, and possibly enrage even the most loyal of fans.

The key to writing an effective twist is to (1) understand exactly what kind of twist you want to pull off before you start writing; (2) carefully plot and manage the flow of information, clues, and character knowledge; and (3) avoid the common pitfalls that many authors make. If you can do all these things, then you are certain to shock, surprise, and satisfy your readers and end up alongside your favorite masters of the genre on the bestseller list!