How Getting The Facts Straight Will Make Your Writing Soar 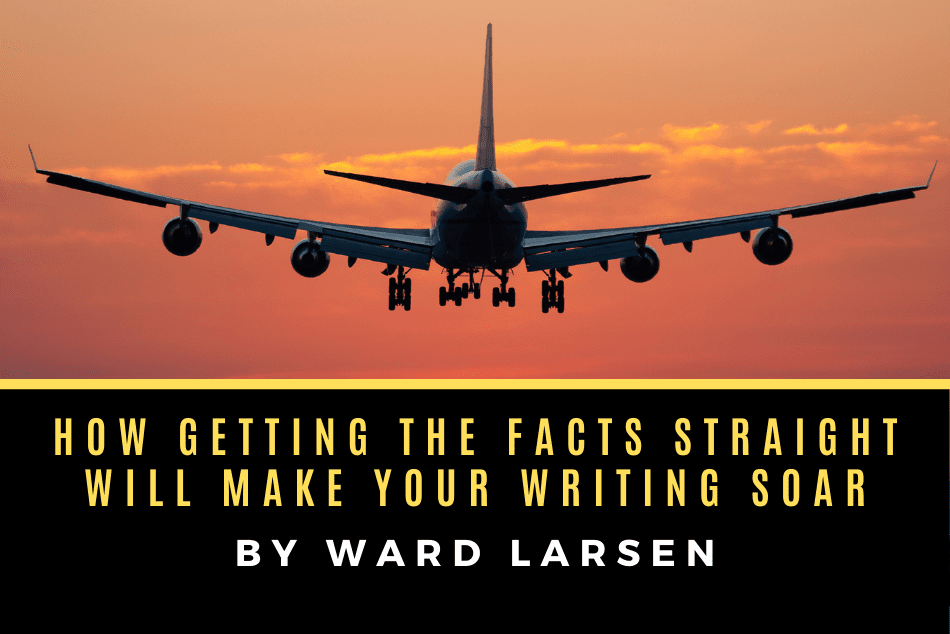 Researching a novel can be a daunting proposition. Any author with a few books under their belt will have stories about reviewers who bring up inaccuracies. Some of these critiques are spot on, others dead wrong. A few fall in the murky middle—details you could have explained more concisely, or that were used out of context. Perfection isn’t realistic. I don’t think I’ve ever read a book, including my own, in which some small error hasn’t slipped through. That said, it serves a writer well to keep the mistakes to a minimum.

How to go about it? To begin, let’s dispense with the old adage of “write what you know.” It’s simply too constraining. Every writer, at some point, must venture outside their area of expertise. The catch: when you do, you’ve got work to do.

Go to the Source

My background before writing was aviation, and while most of my books have at least a few scenes involving airplanes, I’ve written only one trilogy that centers around flying. The point to be made: those flying-related books came more easily. Having professional knowledge lessened the need for research, and when I did hit a roadblock, I had a good idea of where to find the answer. The majority of my books, however, lean toward military fiction and espionage. I was a once pilot in the Air Force, but never Special Ops. And trust me when I say I’ve never been a spy.

How then do we navigate over unfamiliar roads? To begin, all writers are first and foremost readers. Once you’ve nailed down what kind of story you’re writing, spend some time in that genre. I recommend both fiction and non-fiction. Focus on authors who are verifiable experts, and as you read try to extract elements that can be adapted to your own story. For example, when I’m reading fiction about Special Forces operators, and it’s written by Brad Taylor or Jack Carr, I’ve got a high degree of confidence in those aspects of the story. You get a feel for weapons and tactics, as well as the jargon needed to build authenticity (especially important in dialogue). This concept, of course, applies to all genres.

Don’t Get Bogged Down

A word of housekeeping advice. As you’re writing a scene, don’t stop to research every bit of minutiae. When you’re in the groove, concentrating on the flow of the story, the mood of the characters, the last thing you want to do is break off and start chasing the internet for a road name. Design a personal placeholder, something that won’t show up elsewhere in the document (for me it’s (R) ). Using the search function, I can return to those points easily at a later time, knock them out one after the other. I find it far more efficient.

To Google or not to Google?

Once you’ve got your baseline, it’s time to go deeper. Online research is essential—I don’t know a writer who doesn’t use it. Yet we’ve all done internet searches that come up with garbage. The key is cross-checking, going to different sources and getting a feel for which are reliable. The more you do it, the better you’ll get. For the ultimate source, there’s no substitute for first-hand knowledge. In the course of researching I’ve gotten to know cops, SEALs, gunsmiths, submariners, and Secret Service agents, all of whom are generally eager to share their expertise at the unclassified level (occasionally at the price of a beer). And it goes without saying, be ready to return the favor.

A Special Word About Guns

I think most thriller writers would concur, the greatest number of critiques come from the gun community. There are a lot of people out there who know their firearms, or at least believe they do, and relish any chance to prove the point. If you mess up the basics—for example, the difference between a clip and a magazine—you can count on getting shot down. In my view, weapons are little more than window dressing to a story, and an author gains little from narrative that reads like an engineering text. I say get the essentials right and leave the mil spec tolerances to others.

I’ll close with a couple of scenarios from aviation that I’ve seen portrayed wrongly time and again—particularly on the big screen.

We’ve all watched the scene involving a gunfight on an airliner. The first round fired misses the target but goes through the fuselage. The airplane immediately suffers a rapid decompression and dives toward the ground. Flight attendants fly down the aisle, get sucked outside, and hurricane-force winds rage for two minutes. Sorry, but not how it works.

To begin, airliners are full of holes. Most of the them are tiny, mere pinholes in seams and fittings, but additively they’re not insignificant. Engineers know this going in, and so aircraft pressurization systems are constantly forcing air into the cabin. So much so, in fact, that a valve near the tail, about the size of a small doormat, regulates constantly during flight to maintain the scheduled pressure. So what happens when you put a bullet hole in an airplane? Basically nothing. Ten holes? Not much. Now if you put ten rounds into a single window, causing all the layers to fail, then yeah, the cabin would depressurize. The person sitting in that seat might be at risk, but the pressure will equalize within seconds. A mist will form (humid air changing pressure and cooling) and hundreds of passenger oxygen masks will appear (known in the business as the “rubber jungle”). Aside from some wind noise, that’s about it. Pilots put on their oxygen masks and descend to a lower altitude. The only continuing threat would be the gunfight.

The second example is also related to pressurization. Can an emergency exit door be opened in flight? Here’s the basic math. Airliners at cruise are pressurized to roughly 8 pounds per square inch—the equivalent of about 8,500’ above sea level. A standard plug-type exit door measures out at roughly 2600 square inches. Do the math, and you’ve got over ten tons of force holding the door shut. You and your ten biggest friends couldn’t budge it. There is, however, one way around this.

I hope this is helpful. Solid facts are never a story in themselves, but they provide a frame of authenticity to make your novel fly.

Ward Larsen is the USA Today bestselling author of Assassin’s Strike. He is a six-time winner of the Florida