Getting Words on the Page: Writing Sprint Exercises 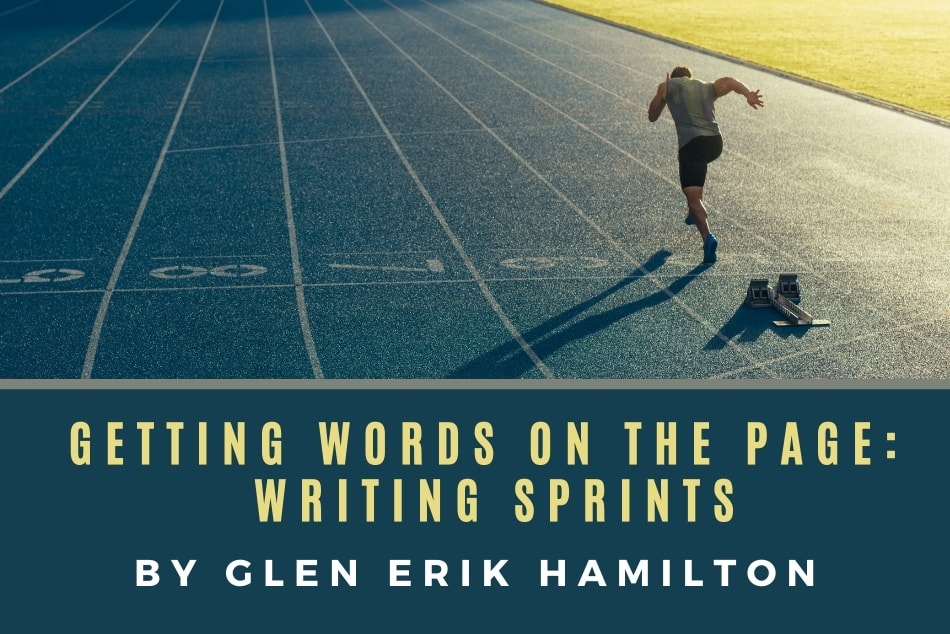 Racing to Get the Words on the Page: Writing Sprint Exercises

For such an intellectual pursuit, it’s amazing how much the act of writing can depend on getting parts of our minds to stopthinking.  If you have trouble getting your inner editor to quiet down, or if you just want to complete that first draft faster, writing sprints may for you.

Having spent a good percentage of my teenaged years in track and field, I was immediately drawn to the concept of writing sprints. I’ve used some variation of them with every story and book I’ve writing, on some books every day.

The goal is simple: increasing our speed in getting words onto the page.

For almost all of us, that means shushing our inner editor and typing as fast as the words come. There are as many ways to do writing sprints as there are ways to run or jog.  I’ll describe a few key concepts and exercises below.

While you’re lacing up your creative sneakers, some notes on logistics:

You’ll need some sort of timer, ideally not your phone if that presents too big of a procrastination temptation.  Get an egg timer, a running watch, or some other device that you can set and set aside.  My personal pick is a boxing timer application, which I can program to repeat rounds of writing with rest periods in between, running all day long if needed.

Some writers love to quantify their work and keep spreadsheets to record stats such as their daily word count (if it’s a variable target), the number of sprints, and even how they felt.  If tracking your numbers sounds like fun and won’t take away from your writing time, that’s a good sign it will work as an incentive for you.  Otherwise, it’s okay to leave such accounting alone.  You can trust that simply by practicing sprints, you will get faster and find sprinting easier over time.

This is the foundation for all sprint work:  Short, fast bursts of writing activity with a brief rest in between.  If you’re just getting started, try 10 to 15 minutes with a break of 3 to 5.  In between sprints, get away from the keyboard and move around.  Focus on the horizon. Have a sip of water.

Do this sprint 2 to 3 times to begin.  What you create doesn’t have to be all your writing for the day, especially if you’re attempting sprints for the first time.  Allow yourself to go back to your tried-and-true method if you have more work to do.

Like real exercise, it’s often best to stop while you’re still enjoying the sprints, not after you’re exhausted. We’re training our brain to like this process. Also like the real world, you may feel slow and clumsy for a while.  Sprinting, body or mind, requires practice.

Real-World Equivalent: Longer races that let runners get into a rhythm, like the 800m or the mile.

The rules are the same as with the Pure Sprint, but gradually building up to longer times, as much as 45 to 50 minutes with 10 or 15 between. You may find that the extra time allows you peace of mind—a momentary mental block can be recovered from—and more opportunity to get “in the zone” (see Spirit Sprints, below). With experience you’ll find the optimal length of time for you.

As with shorter sprints, take advantage of the rest periods in between to clear your mind and move your body. Stretch, whether that’s just reaching for the ceiling or a full yoga sequence. Watch a short video (in a full day of writing I can watch an entire movie in ten-minute increments). Listen to a song.  You’ve earned the mental break, so make the most of it. You have another sprint coming soon enough.

Real-World Equivalent: Any race with a finish line, naturally.

A variation of the Pure Sprint.  Rather than see how many words you can write in 15 minutes, see how many minutes it takes you to reach 300 words, for example.  This can be ideal if you’re trying to hit a daily word count, because the faster you write, the sooner your next break, and the sooner you’re done for the day.  That’s a major incentive to buckle down.

Most people improve with both practice and mutual support. Partner with a writing buddy or buddies to sprint together. Start the “timer” via text message and get to writing.  Use Zoom or another video chat app for an extra dose of competition and accountability—it’s tougher to let your mind wander if you know you’re on camera.

If you win the sprint, great job!  If you’re the slowest of the bunch, you can rejoice as well.  You’ve found buddies guaranteed to make you faster over time AND you have words on the page, which was the real point, wasn’t it?

I’ll argue that word count is a useful metric, not the complete picture of where you want to get.  Rather than the number, consider how much time of the sprint you spent solely focused on the words you were typing and smoothly producing sentences.  Whether that’s a normal feeling for you or a rare visit from the muse, I’d guess that every writer knows the sensation of being in the zone.  A kind of fugue state / mental high that many writers chase—maybe that feeling is why you became a writer!

What we’re aiming for here is less quantifiable, but perhaps even more important: Is the act of writing making us happy?  If so, how consistently?

Real-world equivalent: Running with a vest on. Hard work, and not for the beginner, but an effective strength-building option

At this point you may be asking: So how fast are you, smart guy?

By Pure Sprint standards, I am very slow. A happy writing pace for me is about 300 words, or one page, per hour.

Why so poky?  There’s one aspect to writing sprints that we haven’t considered above: How polished the results are. In short, the quality. Four hundred words in fifteen minutes is very fast typing but not necessarily very fast writing; at a minimum we might all prefer to have coherent sentences that reinforce the narrative on the page.

But doesn’t that require your inner editor? Yes indeed. I don’t often adhere to strict sprint rules any more in my daily writing—I edit some as I go.  Although my word count is less, I’ve found that what I produce is also much cleaner, closer to what I might have produced during a second draft.  I still use a sprint structure, however—usually the Endurance Sprint method, 50 minutes on and 15 minutes off.

Note that Weighted Sprints bring us full circle, allowing our editor very limited access to the writing space to voice their opinion. If they get too pushy, or if the editing takes more than a few seconds per sentence, then leave that sentence be and get back to putting more words on the page.

Being able to adjust on the fly, dialing the editor up or down as needed, and allowing nothing to stall your momentum.  That’s edging toward sprint mastery.  And isn’t that what we all want?  Have fun!

Ready to give this a try? Tell us how it goes on Facebook! A native of Seattle, Glen Erik Hamilton was raised aboard a sailboat and grew up around the marinas and commercial docks and islands of the Pacific Northwest. His novels have won the Anthony, Macavity, and Strand Magazine Critics awards, and been nominated for the Edgar®, Barry, and Nero awards. He now lives in California with his family, and frequently returns to his hometown to soak up the rain. His latest novel, A DANGEROUS BREED is available now.