How to Write A Powerful, Enticing, Intriguing, Amazing Opening Line For Your Novel 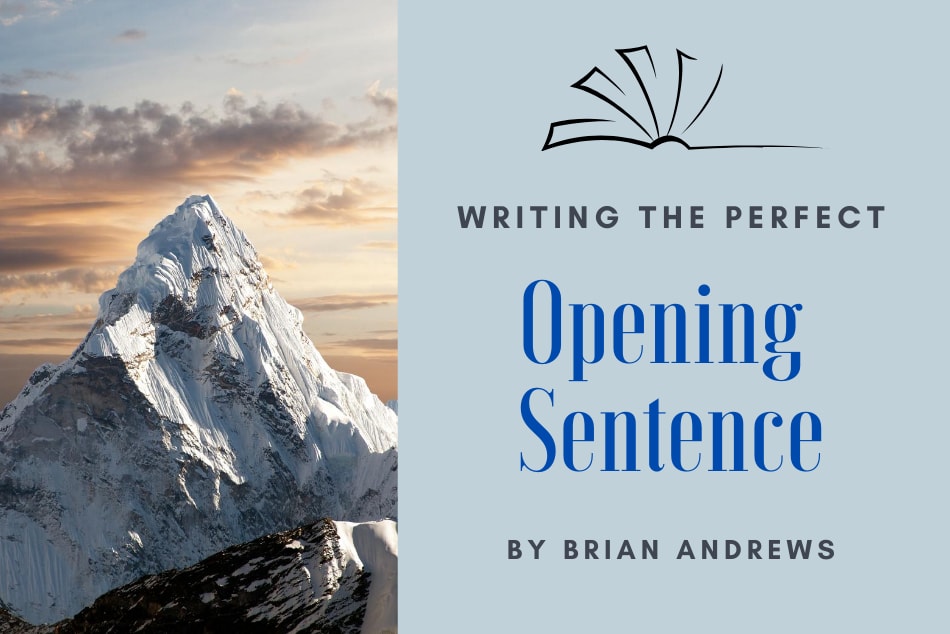 How to Write A Powerful, Poignant, Intriguing, Amazing Opening Line For Your Novel

While this time-tested adage is typically associated with business and dating, it also holds true for books. A novel’s opening line is an author’s first impression with a reader. What kind of first impression your opening line makes, sets the tone for the reader’s experience to come. When executed properly, a masterful opening will hook your reader. Fail to entice, however, and you’ll lose her at hello.

Your opening sentence should be the hardest working sentence in your novel. Period. If it takes you hours, days, or even weeks to finalize, don’t fret, because it’s time well-spent. In my experience, the best opening sentences I’ve written were the ones I crafted during developmental edits. In other words, I would argue that an author cannot write a truly effective and all-encompassing opening that hooks the reader until the majority of the book has already been written. Only after you, the author, understand all the nuance, have finalized the plot, amplified the stakes, and traveled with your protagonist on his or her unique journey, can you hope to capture all of this in a single sentence.

Any opening sentence worth its salt must do at least one or more of the following. The more of these elements you can work into a tantalizing, powerful opening the better.

But please don’t misunderstand, by providing this list I’m not giving you permission to write a run-on sentence of epic proportion. The modern thriller reader isn’t looking for Shakespeare. Your opening should be tight and poignant. Try to impress with less.

How the Masters Do It

To prepare for this post, I asked thriller fans to send me examples of their favorite opening lines from their favorite authors and the list did not disappoint. Here’s a small sample of submissions that resonated with me. As you read on, try to identify how many elements from my list was the author able to incorporate.

“The naked man who lay splayed out on his face beside the swimming pool might have been dead.” ~ From Russia With Love, by Ian Fleming

“The last camel collapsed at noon.” ~The Key to Rebecca, by Ken Follett

“Mitch Rapp stared at his reflection in the dusty, cracked mirror and questioned his sanity.” ~ American Assassin, by Vince Flynn

“Few people presume to whisper into the ears of Presidents.” ~ Assassin’s Strike, by Ward Larsen

“Death is my beat.” ~ The Poet, by Michael Connelly

The first four elements listed above are self-explanatory, but the last one “Create a Hook” is worth a closer look because if nothing else, an opening sentence’s primary job is to hook the reader. We could debate what constitutes a “hook” but I would argue that effective hooks come in one of two flavors:

In scenario one, the author is posing a question and that question is implied (as opposed to being written as a question). Why are questions effective hooks? Because when you pose an interesting question, most readers are going to want to know the answer, and the desire to learn the answer will drive them to keep reading. For example, take Vince Flynn’s opening from his iconic thriller American Assassin:

“Mitch Rapp stared at his reflection in the dusty, cracked mirror and questioned his sanity.”

For me, the implied question is obvious. In fact, there are several: “What happened to Mitch Rapp to make him question his sanity? What has he done? More importantly, what has been done to him?” Are you curious to know the answer? Several million other readers were too, which is why Vince Flynn’s Mitch Rapp series is legendary in the thriller space.

Conversely, with Shock & Awe, the goal is to grab the reader by the neck and take his breath away. Take, for example, JT Ellison’s gripping opening in Good Girls Lie.

“The girl’s body dangles from the tall iron gates guarding the school’s entrance.”

When I read that opening my initial reaction is “Oh my God!” My mind is flooded with visceral and disturbing imagery, conjured in only thirteen words. I can’t get it out of my head, and now I’m hooked.

But as powerful as each of these examples are on their own, the two methods are not mutually exclusive. Just like you can order a chocolate-vanilla swirl at Dairy Queen, a talented author can write a hook that poses a question and hits you with shock & awe at the same time. Take Ian Fleming’s famous opening From Russia With Love.

“The naked man who lay splayed out on his face beside the swimming pool might have been dead.”

Like Ellison’s opening, Fleming paints a vivid and disturbing picture that shocks the reader, but just as you’re starting to imagine the dead, naked man beside the pool, Fleming hits you with “might have been dead.”  Hold on—might have been dead? No way I can stop reading now. Is he dead or not? The shift from dismay to curiosity is an extremely powerful one-two punch, making this one memorable hook that James Bond fans still love to talk about.

Breaking It All Down, and Putting It Back Together

“The last camel collapsed at noon.” ~The Key to Rebecca, by Ken Follett

This remarkable opening sentence is only six words long, and yet it might be the hardest working sentence of the bunch. Let’s break it down:

Without question, Follett checked all the boxes with his first line. As far as openings go, this simple, powerful sentence is a masterpiece…and I hope it (and the other examples I highlighted) inspire and guide you as you craft those oh so critical opening words for your next masterpiece! What is your favorite opening line? Let us hear it on Facebook!