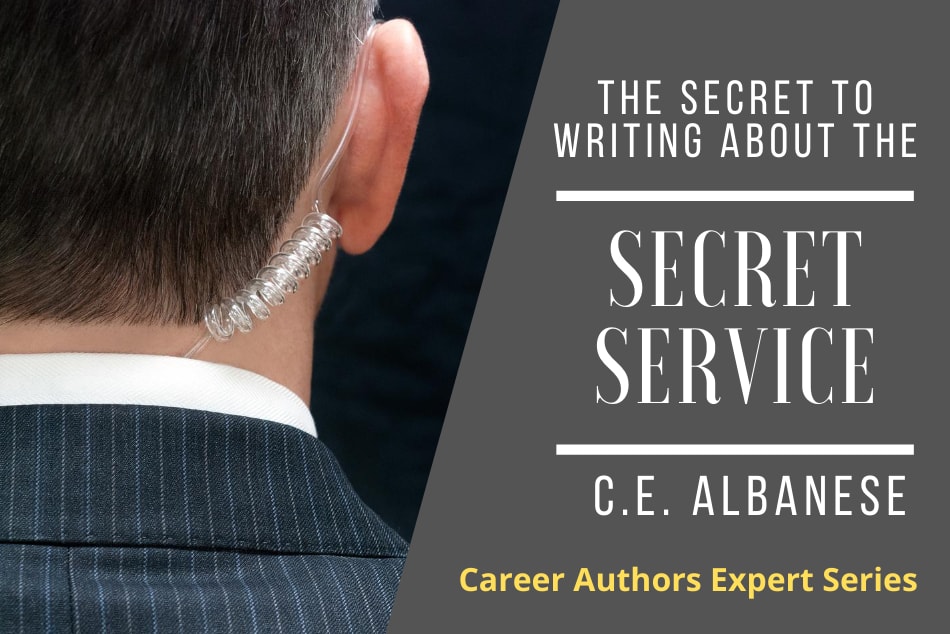 SO YOU’VE DECIDED TO MAKE YOUR PROTAGONIST A SECRET SERVICE AGENT…NOW WHAT?

From the outside looking in, the men and women who make up the Secret Service are shrouded in secrecy. Their job, by definition, is not to draw attention to themselves. Until the unthinkable happens. Ever vigilant, agents remain ready and well-equipped to react to threats from nation-states, terror groups, and unhinged individuals with a desire to harm the U.S. president, vice president, their families, and visiting dignitaries.

WORTHY OF TRUST AND CONFIDENCE

So you’ve decided your protagonist is a Secret Service agent. Great. But what does that actually entail?

First, it means your hero will be dedicated, highly-intelligent, hard-working, adaptable, and above all else, loyal—to their squadmates and their country. Long before receiving an offer of employment, agents must submit to a battery of tests, both physical and psychological. Understandably, the job requires agents to be in top physical shape. And because of their proximity to our nation’s leaders and unfettered access to the country’s most classified information, agents must possess unquestionable allegiance.

Second, they will, without hesitation or regard for their well-being, lay down his/her life to protect the Office of the Presidency. Presidents and their political ideals come and go, but the Office endures. And with it, our republic. This decision, to throw one’s self into harm’s way, is something your hero will have internalized long before graduating from the Secret Service academy. I should know: I spent a decade in the Secret Service. My wife is a Secret Service agent, as are some of my best friends. Each has been vetted to be “Worthy of Trust and Confidence,” as the Secret Service motto goes.

Secret Service agents have diverse backgrounds, so why limit your protagonist’s to having either military or police experience? The Service recruits prospective agents from all walks of life. Sure, several of my shift mates were once Delta Force operators and Marine Force Recon snipers. And yes, I worked alongside prior SWAT and police officers. I even stood guard with a few retired NFL and NHL stars.

Every agent learns to make themselves big in the face of a threat.

But you’ll find agents who previously worked as teachers, accountants, social workers, yes, and a lawyer or two. These folks often make the better Secret Service agent. Why? Because they have fewer “bad habits” to unlearn. For example, when the shooting starts, former operators and police officers are trained to move and take cover to win the fight. It’s an immediate response—it’s muscle memory. But in the Secret Service, agents don’t move to cover to win; they are the cover. And it doesn’t matter if the agent lives because it’s only considered a win if the protectee survives. It’s difficult to re-train muscle memory, and some of the most switched-on operators have a hard time flipping that switch. But eventually, every agent learns to make themselves big in the face of a threat.

It’s a running joke amongst agents that even though they are highly trained and highly capable, they are, in the end, nothing more than a “meat shield”: a barrier of flesh between a potential attacker and the protectee.

NOT ALL AGENTS WORK ON THE PRESIDENTIAL PROTECTIVE DIVISION

The Secret Service is one of the few dual-mission federal agencies. It has a protective and investigative mandate. And not all agents work on the Presidential Protective Division (PPD). That honor is determined by the needs of the Secret Service.

Agents don’t graduate from the Secret Service Academy and get assigned directly to PPD. No, first they cut their teeth conducting criminal investigations in one of the Service’s many field offices. Your protagonist needs a developed background, right? Well, here’s where your agent will obtain it.

Agents spend the first four to six years of their career investigating the following crimes:

Agents conduct these criminal investigations while also supplementing the ever-changing manpower needs of the protective mission. And it’s only after completing several years of investigative work that agents earn the right to transfer to either PPD, the Vice President’s Protective Division (VPPD), the Dignitary Protective Division (DPD), or the Protective Intelligence Division (PID). Oh, and agents don’t get to pick which protective division they go to. No, that decision is determined by the immediate needs of the Service. An agent may want to go to “The Show” and protect the president but may instead end up at the Naval Observatory guarding the vice president.

TOOLS OF THE TRADE

Secret Service agents get to use some of the coolest “toys” available. Unfortunately, the existence and inner workings of these special pieces of equipment are classified, but here’s some of the common tools your character will utilize.

Since 1998, an agent’s assigned duty weapon has been the SIG Sauer P229 in .357 SIG, but that will soon change to the 9mm Glock 19 MOS Gen5. Although both weapons are almost identical in size there are major differences. The P229 is double-action/single-action hammer-fired pistol, meaning the first trigger pull (double-action) requires ten pounds of pressure whereas subsequent trigger pulls (single-action) only require four pounds. In contrast, the Glock 19 is a striker-fired pistol, without a hammer, meaning every trigger press requires the same 5.5. pounds of pressure. (FYI: agents don’t use shoulder holsters and usually carry a small back-up weapon either on their ankle or small of the back)

There is no balance. Agents work long hours, rotating between the morning, afternoon, and midnight shifts. Their scheduled days off change every week and usually aren’t known until the Friday before the week begins. Agents travel all over the world, often with short or no notice. They spend more time with their fellow agents than with their actual families.

It’s a sacrifice, one borne not by just the agents, but by their spouses and their children. This places a massive strain on relationships. Often too much to bear. Unfortunately, divorce is common. And although the Secret Service does its best to give agents some semblance of a normal life, it’s an almost impossible effort. The Secret Services mission is three hundred and sixty-five days a year, twenty-four hours a day. It’s a manpower-intensive profession, which means agents are guaranteed to miss holidays, anniversaries, birthdays (sometimes the actual birth of their children), and many of their children’s firsts.

It’s one of the many reasons why agents marry other agents. I did. I met my wife at the Academy. We married three years after graduating. It’s just easier when your spouse “gets” the job. So, no, it’s not a trope to put these things into your story.

If you decide to incorporate Secret Service agents into your stories, remember this: while agents keep their secrets close to the vest in real life, they’re not one-dimensional. They have backstories, triumphs—and yes, failures—and all of those can make for characters epic in scale and rich in human nuance.

Over the years, the Secret Service has opened up a little bit about its methods and capabilities, with an emphasis on “a little bit.” It’s best to believe half of what you see and none of what you hear. Regardless, here’s a list of additional sources that may help you in the development of your character:

C.E. Albanese is a former U.S. Secret Service special agent with more than twenty-years of law enforcement experience. His details including assignments in the Newark, NJ and New York City Field Offices, former vice presidential candidate Sarah Palin, and the Vice President’s Protection Division. His first novel, DRONE KINGS, is a thriller with a Secret Service hero and is currently under submission. He is also a co-host of The Crew Reviews podcast. He’s happy to answer your questions at cealbanese.books@gmail.com .