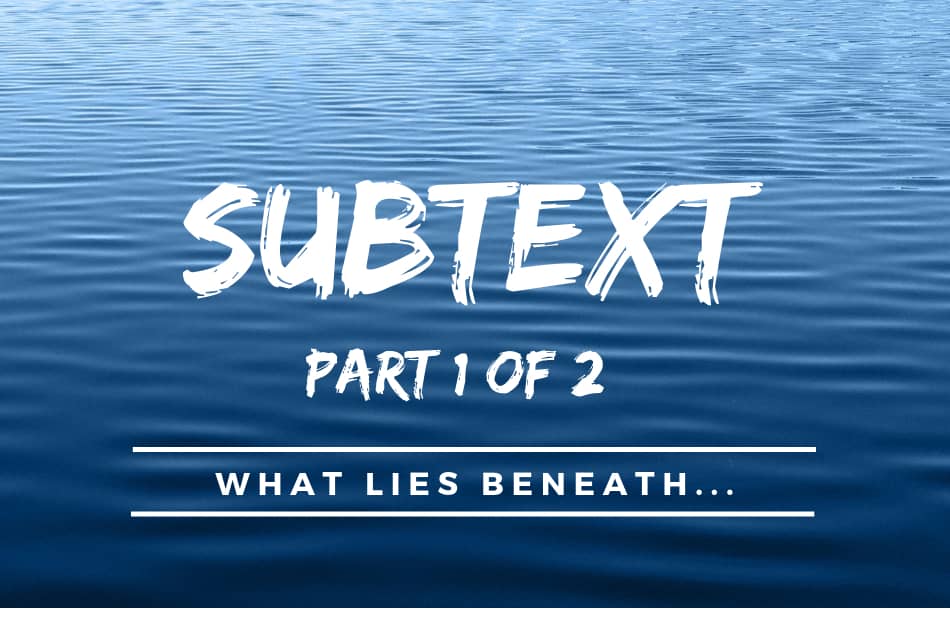 If the craft of storytelling had its own Oscars, you can probably guess which elements would get top billing. Plot would sub in for Best Picture, Character would fit the bill for Best Actor in a male or female role, and narrative would stand in for Best Director. But just like with the Academy Awards, when it comes to craft, there are other dark horse categories that should not be underestimated. Subtext is one of these elements and it plays a critical role in the emotional power of any novel.

Subtext is to a novel as the musical score is to a film.

Like a musical score, subtext is the underlying movement playing in the background—providing tempo, invoking emotion, accentuating action, and creating tension. Without a musical score, a movie feels leaden and uninspired. Without subtext, the same is true for a novel.

If you’re not familiar with subtext, or if my metaphor is simply not working for you, then let me back up and provide a definition.

“Subtext is content “under”, and hence, “sub”, or hidden beneath, the actual dialog or text. To gather subtext the audience must “read between the lines”. This is crucial to a clear and accurate understanding of the word. If it is stated explicitly, it is by definition not subtext, because it is no longer hidden.” —Wikipedia

As a guy who writes covert operations thrillers, I like this definition because it states both what subtext is and what subtext is not. Subtext is covert. Subtext is not obvious. But just because something is not obvious, does not mean it is not impactful. In the military, covert operations is that tactical element working behind the scenes to influence and coerce a particular desired outcome in lieu of launching an all-out offensive. As an author, I think of subtext as the covert operations element inside my fiction, secretly working hand in glove with dialogue and prose to achieve the desired result.

Plan the work, then work the plan

I’ve found the best way to effectively incorporate subtext is to set a “subtext goal” for a particular scene, chapter, or section of the novel. By doing so, you can plan how to incorporate multiple subtext elements (setting, body language, tempo, dialogue beats, innuendo, etc.) in concert to reinforce and amplify the effect so the subtext resonates and is sure to be felt by the readers. Equally important, by clearly articulating the subtext you want to convey, you remind yourself of the very thing you DON’T want to say on the page. Remember, subtext is the unwritten sentiment and must be communicated covertly.

For example, in the Andrews & Wilson novel CRUSADER ONE, escalation and inevitability were two of the primary themes of the story. By the midpoint of the book, conflict is brewing between Israel and Iran. Using subtext, we wanted to convey that the US military would be dragged into yet another war regardless of any steps by the cast of characters taken to avoid it. We foreshadow this using subtext over several chapters as follows:

Taken at face value, the prose indicates war is not the desired outcome, and yet thanks to the power of subtext, the reader can’t help but feel it is inevitable.

Subtext is the most underrated, enigmatic, and poignant tool in a writer’s toolbox.

In the next installment, I’ll dive deeper into subtext and provide four easy methods you can use to incorporate subtext into your fiction. Until then, get out your goggles and your snorkel and start looking for subtext lurking just beneath the surface of your favorite novel or the one you’re reading right now!