Tips for using “Tags” and “Beats” to improve your dialogue. 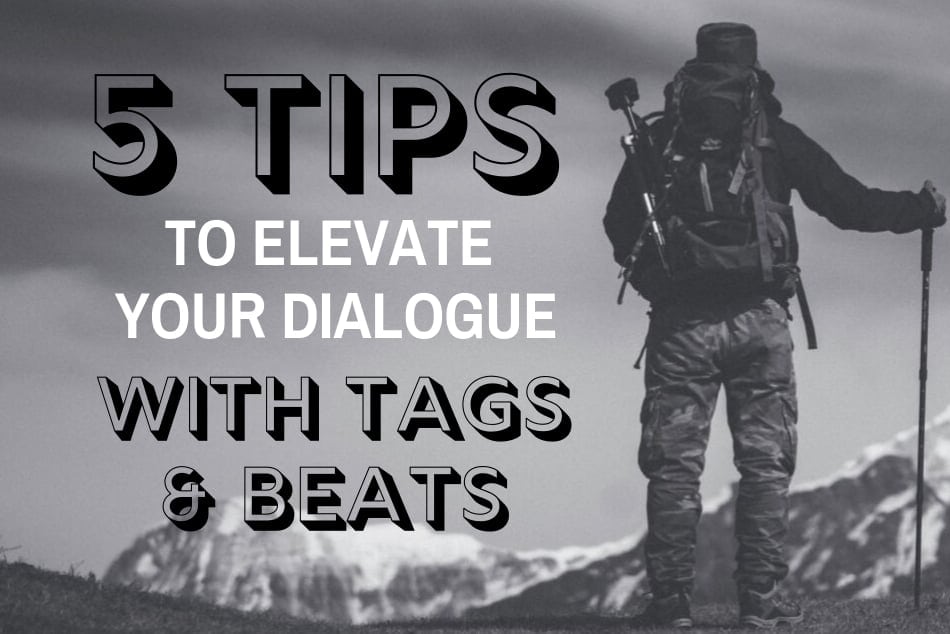 How to Use “Tags” and “Beats” to Elevate Your Dialogue.

If you think dialogue is something that only happens “inside the quotation marks,” then think again. Yes, what your characters say matters immensely, but the savvy author knows that how they say it matters too and that’s the topic of this post. Before we dive in, let’s start by defining these two unsung heroes of dialogue.

“I told you I’m handling it, so back off,” Dempsey shouted.

In a conversation between two or more speakers, dialogue tags often do double duty. First and foremost, they remove ambiguity about who is speaking. Second, depending on the tag selected, they can provide descriptive insight to the character’s emotional state when delivering his or her line.

A beat is an action performed by the speaker, immediately before, during, or after speaking. In the next excerpt, the action beat is the complete sentence that precedes the dialogue and ends with a period.

Dempsey’s nostrils flared. “I told you I’m handling it, so back off.”

In this version, the dialogue is identical to the first example, but a beat is used in lieu of a tag. The speaker is identified by name in both cases, but instead of describing how Dempsey delivered his line (he shouted) an easily recognizable body language cue (his nostrils flared) conveys the same information to the reader (Dempsey is angry).

Now that we’ve covered the basics, it’s time to move onto the good stuff!

Whether they precede, interrupt or follow the dialogue, tags always get a comma. See the following three examples:

Conversely, beats require a period, even if used to interrupt the dialogue.

Also, it is worth noting that no one sighs, grunts, or breathes dialogue. These are action beats. But, if you’re committed to using them as a tag, here’s one grammatically acceptable way to do it:

“I know the truth, but I’ll never admit it,” she said through a sigh.

So far I’ve described tags and beats as if they were separate and distinct animals, incompatible of coexisting in the wild, but this is not true. Dialogue tags and action beats can be used in conjunction with great effect.

“I told you I’m handling it, so back off,” Dempsey shouted, shoving Munn in the chest.

In this example, the tag is “Dempsey shouted,” and the beat is “shoving Munn in the chest.” If this feels like too much emotion or redundant information, you can tone it down by replacing “shouted” with “said” and let the dialogue and the action beat do the work. Here’s another beat-tag combo example:

“The answer is no,” he snapped, turning to leave.

When I was writing my first novel, The Calypso Directive, I made a common rookie mistake and tried to get fancy with my dialogue tags. My thought process at the time went something like this: “Said is so boring, why not spice things up with descriptive tags?”

I went nuts, with characters hollering, shouting, screaming, lying, calling, mumbling, murmuring, and possibly even guffawing their way through their conversations. Thank the stars I had a savvy beta reader (i.e., wife) with the confidence to point out how distracting and annoying my melange of dialogue tags were. Because of its ubiquity and frequency, the tag “said” disappears into the ether of prose where it is unnoticed by readers. A good rule of thumb, 80% of your dialogue tags should incorporate said.

That being said, when discussing the topic with Career Authors resident editorial guru Dana Isaacson, he was quick to point out that in “Elmore Leonard’s 10 Rules for Good Writing,” Leonard goes even further and says, “Never use a verb other than “said” to carry dialogue.

TIP #4: Replace your adverbs with beats.

Anyone who has attended a writer’s workshop or follows Stephen King already knows the industry’s position on adverbs—avoid them like the plague. But if adverbs are so terrible, why do they exist you ask? Like so many other perplexing literary questions (Why are there 5 syllables in monosyllabic? And for Pete’s sake why isn’t phonetic spelled like it is pronounced?) I do not know how adverbs came to be universally despised. Thankfully, there is a solution and that solution is a beat. So add Tip #4 to Hank’s Handy Dandy Manuscript Checklist for your next book and replace all your dialogue tag adverbs with beats. Example:

“You complete me,” Jerry Maguire said affectionately to Dorothy Boyd.

DELETE “affectionately” and REPLACE with a beat:

“You complete me,” Jerry said, gazing into Dorothy’s eyes.

Just like in dancing, in dialogue too many beats make an otherwise enjoyable sequence become frenetic. In other words, are your characters waltzing or dancing the Macarena? Need an example?

Jon narrowed his eyes. “Tell me why you’re here, Meredith?”
“Because, Jon, we need to talk about this,” she said, fidgeting.
He crossed his arms across his chest. “I have nothing to say to you.”
“Is that so?” she said, hands on hips. “You sure had plenty to say last night.”
“The answer is no,” he said, turning to leave.
She grabbed him by the arm, stopping him cold. “Hell no,” she said, setting her jaw in defiance. “You’re not walking away from me this time.”

It’s only six lines of dialogue, but these characters might as well be dancing a jig they’re moving around so much. Yes, the beats provide descriptive insights to each character’s state of mind, but they also undermine the rhythm of the conversation and, quite frankly, patronize the reader. Try this version instead.

Jon narrowed his eyes. “Tell me why you’re here, Meredith?”
“Because, Jon, we need to talk about this.”
He crossed his arms across his chest. “I have nothing to say to you.”
“Is that so?” Meredith said. “You sure had plenty to say last night.”
“The answer is no,” he said, turning to leave.
She grabbed him by the arm, stopping him cold. “Hell no! You’re not walking away from me this time.”

Dialogue tags and action beats are essential elements in every writer’s toolbox. So grab your manuscript and introduce it to these Five Tips. I promise, when used properly and thoughtfully, well-crafted beats and tags will elevate your dialogue sequences to new and breathtaking heights. (Too much? Sorry, I couldn’t resist…)